It’s an epidemic, really. Cleveland is on fire.

We’re celebrating October baseball with the Indians. On Tuesday night, Cleveland basically ruled sports. And LeBron pretty much covered it in his speech at the Cavs’ 2016 NBA championship ring ceremony this week.

Even Stephen King and Tom Hanks are cheering for ‘Believeland.’

Winning is quite magical. It’s the one thing we all (miraculously) can agree on. It started in June with the Cavs winning Game 7. I was there, in downtown Cleveland, holding strangers’ hands, cheering, chanting, hoping – and in that final moment, tearing up together when the buzzer hit double zeroes. No barriers, no cultural differences, no social prejudices keeping us from each other. And here we are again, in the World Series.

This leads me to an interesting thought about community and its link to sports. Cleveland fans are incredible. Our streets are lined with red, white, and blue. Quite fitting, and quite refreshing – for a time when this country’s patriotic colors seem a bit divided. 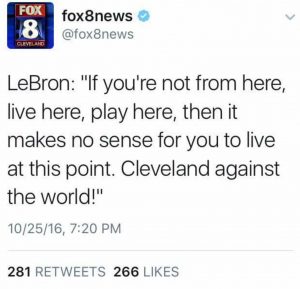 Now, I don’t run a professional sports team, but I am a business owner. And building a really effective team is so important. My team, or community, is a reflection of me. The Indians and Cavs didn’t just stumble into their success this year. It took time (a painstaking amount of time). Teams have always been, and will always be, an essential ingredient for building a successful business, and Inc.com covers how to overcome some of these challenges in this great article, ‘5 Steps to Creating Really Effective Teams.’

I was at an event just yesterday, where one of the key speakers – a PR and communications leader in Northeast Ohio – talked about the enigma that is Cleveland Indians’ manager Terry Francona. A man who recognizes the power of teamwork, who takes the time to build a community in his dugout. He knows how to talk to each player – what they need to hear and how they need to hear it. A true leader and effective communicator.

Now, there’s much more to building a successful team than five seemingly simple steps. However, if given the dedication, a team will thrive, whether it’s on the court, on the field, or in the office.

Inside all of us is a desire to feel like we’re a part of something bigger. And healthy competition keeps us, well, healthy. These are just two reasons why feeling connected – as a part of community, a team – is so important…an important topic I’ll cover in my next post.

And in case you missed it, Charlie Sheen’s unforgettable character (both on- and off-screen) resurfaced this week as the Indians headed into the World Series. He may not have thrown out the first pitch in this week’s Game 1, but he’ll get his 30 seconds in my first blog post. That has to count for something.